Unlike the other protected areas in the region, Ngorongoro is not a national park but a conservation area. This means that the land is managed not only for the benefit of the natural flora and fauna but the Maasai people too are permitted to live in the area, their cattle sharing the grazing with the indigenous grazers.

The Ngorongoro Highlands are the most fabulous region of dramatic volcanic scenery, with an unbelievable range of landscapes and micro-climates, from the rainforested eastern slopes above the rift escarpment, through the peaks and craters of the central region and then down into the arid semi-desert areas on the western Serengeti side.

One of the great advantages that the NCA offers visitors is the freedom to walk and hike freely across the landscape (although not in the Ngorongoro Crater itself and always accompanied by a park ranger). This makes it possible to get out of the Landrover for a while and really get to appreciate the area in depth.

The Eastern boundary of Ngorongoro is defined by the rift valley escarpment – a great wall of rock which extends from the northern to the southern horizon. Below this escarpment, the land is generally an arid semi-desert, but as soon as the prevailing easterly breezes climb the rift the air is forced to give up its moisture. The rainfall band is sudden and almost immediately the barren landscape gives up to montane rainforest, which clads much of the eastern flanks of the volcanoes of Ngorongoro. Within a few short kilometres, the winds have spent most of their rain, meaning that the uplands support grassland rather than the forest, whilst the western slopes on the other side quickly reduce back to arid scrubland.

On this eastern flank just above Manyara, there is a triangle of land where the montane forest has been cleared to make way for farmland. This is the home of the Datoga people, a Bantu race whose residence in the area pre-dates that of their arched enemies the Maasai, the arrival of whom arrival around 150 years ago finally limited them to just this little area of land. This is a classic conflict between pastoralists and farmers, which is generally contained these days by governmental intervention. The Maasai of Ngorongoro claims that when the parks and conservation areas were first initiated and their warriors told that they could no longer hunt lions, a prospective moran would instead go out hunting for the penis of a Datoga, which he would carry back to his village as proof of his new-found manhood. We have been assured that this “very rarely” happens any more (although the lion hunting definitely continues). In the short one hour drive from Manyara to Ngorongoro the transition is from savanna, through increasingly rich farmland, to coffee plantations and then finally the Ngorongoro Park Gate marks the start of the rainforest.

The Ngorongoro Crater is in actual fact not a crater but a caldera. That is to say that it is the remains of a volcano which has completely collapsed at a time when the molten magma inside it died back during a period of inactivity. The volcano of Ngorongoro is reckoned to have been considerably higher than even the great Kilimanjaro before its collapse. If you look at the angle of its flanks now and project them up into the air it is almost possible to envisage the size of this great snow-capped mountain and the enormity of the event by which the crater that exists today was formed, around two million years ago. Ngorongoro is the largest unflooded caldera in the world.

The crater hosts a remarkable wildlife spectacle. Contained within these walls are microcosms of so many of the eco-systems of this part of the world. There is savanna, bushland, forests and lakes, inhabited by the same range of game, from elephant to lion to wildebeest. There is even a soda lake for the flamingos and in the green season, small numbers of wildebeest migrate through. The crater has permanent water too. The only absentee of note is the giraffe, which cannot manage the steep slopes. Heaven knows how the hippo got here.

Visiting the crater is one of Africa’s great safari highlights. The downside of this is that there is inevitably quite a lot of traffic, with up to 200 vehicles entering on peak days. The trick is to visit out of season or to hit it at unusual hours of the day (very early, very late or around lunchtime when everyone else goes to the lake for a picnic). Actually the traffic is not so bad, provided that you are headed out to somewhere remote at other times during your safari.

Game sightings in the Ngorongoro Crater

During 2001 the lion of the crater once again suffered an attack from a certain type of biting fly, which causes them great irritation. In 1962 a similar epidemic reduced the lion population in the crater from around 85 to just 15 animals. Fortunately this time the effects were not so serious, but the net result of having a research vehicle out with them for most of the season was that some of the lions have become incredibly well accustomed to having vehicles close at hand. There is now one male who has the habit of walking up to vehicles and lying down underneath them for shade. Even more amusing, there is one female who has taken to jumping up onto vehicles. One of our drivers has a superb photo of him in his Landrover, with a huge lion face staring through the windscreen. We are trying to obtain a copy. Anyway, the point of all this is that you should keep your distance from these lions, especially if you have a canvas roof. Just when you start to think that the crater is all a bit tame, that’s when it hits you. The crater is the place that you are most likely to see lion and hyena hunting during daylight hours and sometimes this can get pretty grim …

In July 2001 the lake pride were seen to attack an old buffalo. They got hold of him, ripped his backside apart and then wandered off for a lie-down, leaving the poor old boy to bleed to death. After about half an hour, the very last thing the buffalo did before it dropped down dead was to stove in the side of a Landrover. The lion then cooly strolled over and ate it.

In November 2001 three hyenae were seen to pursue and pull down an adult wildebeest, which they proceeded to disembowel and eat. The poor creature continued to thrash around in desperation whilst the three hungry hyenas buried their heads into its stomach.

On a lighter note, one of our safaris in the crater on Christmas Day 2001 was crossing one of the small streams that lead down from the hippo pool when they noticed a baby hippo being washed along in the current. The creature was obviously in distress and so the driver guide got on the radio to the ranger post. When the rangers arrived it was decided that action should be taken and the baby hippo was gently lifted and carried back to the hippo pool, where it was successfully reunited with its mother (who didn’t seem to have realised anything was amiss). The baby was estimated to be less than three days old and weighing as little as 5kg. The little pinkie was apparently very sweet, murmuring gently to its rescuers.

The southern part of the Ngorongoro Highlands are very beautiful and yet very rarely visited. Adjacent to the Ngorongoro Crater there are three main volcanic masses in this area. Oldeani straddles the rift escarpment and is amongst the oldest volcano in the region, with a rarely explored crater. The smaller Sadiman leads up the Makarot, which it the larger volcano that dominates the Southern Serengeti. Heading on south towards the small town of Endulen, there are some fine stands of acacia forest before the landscape opens up to sweeping pastures, with distant views past thatched hut villages and over the Eyasi Escarpment to the great soda lake beyond. It is in the remote forests around Lake Eyasi that the Hadzabe people hunt and gather their food.

About an hour past Endulen is Laetoli, the location for the Leakey’s magnificent discovery of footprints in the rock – over a million years old and clear evidence of man walking upright – the arrival of Homo erectus.

Despite being in the NCA, the Western part of Ngorongoro is included in the Serengeti section of these notes since the short grass plains that start at the foot of the hills are an integral part of the Serengeti eco-system.

North of the great crater itself, once again there is a beautiful and little-visited area. Passing the not particularly pretty Nainokanoka Village there are two further craters, both of which visitors can hike into accompanied by a ranger. Olmoti is a high crater which makes a nice easy stroll for 2 or 3 hours.

An hour further across the Bulbul Depression, where Maasai bomas are scattered across the hillsides, is the more spectacular Empakaai Crater, with its sheer walls and mysterious flamingo-covered crater lake surrounded by thick forest. From Empakaai it is possible to make a two-day hike down to the foot of the active volcano Lengai and the magnificently Lake Natron which is made up of salt and soda.

T47 : Lake Natron
The Natron Area Natron is actually outside the NCA to the North East. It is an area of stunningly bleak landscape, with volcanoes, lava floes, soda formations and escarpments. There are four ways to reach Natron and all of them are difficult, not least the “usual” road from Mto wa Mbu (Manyara), which involves making the Landrover buck its way through superbly deep fields of dust. There is no way to pass in the wet season.

Lake Natron is the most viciously sodorous of all the lakes along the escarpment here. From above its waters are twisted into red and green curls. There are usually more flamingo here than anywhere else. The area is dominated by the Maasai “Mountain of God” … Oldonyo Lengai … the only volcano which remains active. It is possible to scale the mountain in about 4 hours, but you need to set out in the middle of the night to avoid the heat in this barren landscape. At the top there are vents which seep sulphorous gases, which every twenty years or so open out to belch forth and cover the whole landscape with a snowfall white ash. Oldonyo Lengai … the Maasai Mountain of God

A real highlight of a visit to Natron is a trip up to the Ngare Sero waterfalls. This involves a short drive and then a half hour trek into a gorge, where you can strip off and enjoy the “washing machine” at the base of the falls.

At Engaruka, between Natron and Mto wa Mbu there are the ruins of an ancient city, built by a race which pre-dated the existing peoples of the region. There’s not much to see on the ground, so probably best left to the enthusiast. 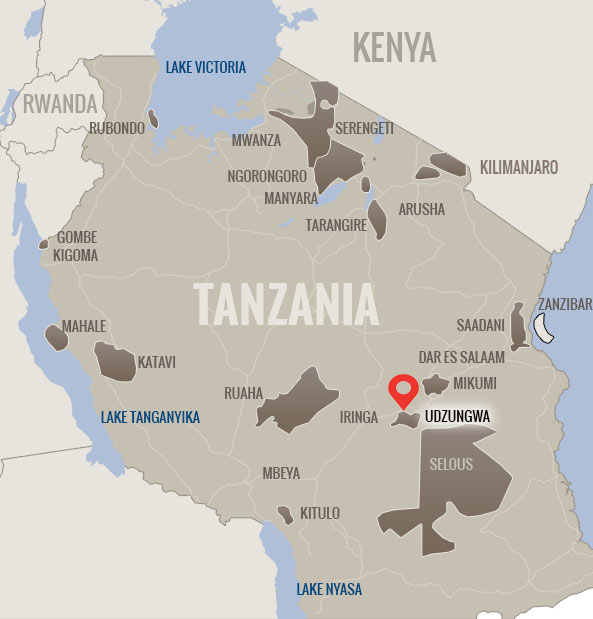