FOOD: Herbivores (Acacia leaves at the apex of the tree)

SIZE COMPARISON TO A 6-FT MAN: 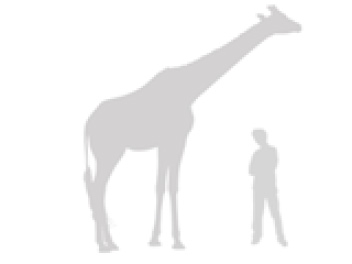 About the African Giraffe

The giraffe is the tallest animal on land with an average height of around 5 meters (16-18 ft.) from top to bottom.

Its scientific name Giraffa camelopardalis came from the belief that it was related to a camel and a leopard because of its resemblance to the camel, characterized by its long legs, long neck, and distinctive spotted pattern that makes it look like a leopard’s pattern.

Giraffes live in Africa’s savannah woodland where acacia trees are found in plenty. Their long height makes them eat leaves and shoots located higher on the trees where other animals cannot reach.

The best place to see the giraffe in Tanzania is the Serengeti National park and the Tarangire national park where there are many Masai giraffes.

The best destinations to see the giraffes in Kenya is the Amboseli national park, Masai Mara Game Reserve and Samburu National park where there are many reticulated giraffes.

Their adaptation to their environment gives them long tongues which to help pull leaves from the trees. A full-grown giraffe consumes over 45 kg (100 lb.) of leaves and twigs a day which means they spend most of the day eating.

When walkinggiraffes move like they are cat walking, both legs on one side of their body and then both legs on the other side; this unique movement is specific to giraffes. They run just like all other animals, however they cannot run for a long distance with a running speed that can reach 55 km/h (35 mph) at full speed.

Giraffes are active for more than 20 hours a day, they remain active day and night and they sleep less than two hours a day. When sleeping, giraffes tuck their long feet with their head resting on their hindquarters, Sometimes they sleep while standing for a very short time.

Normally in the wild, Giraffe live up to 25 years. At around 5 years old, an adult female giraffe is able to become pregnant. About the giraffe gestation period, they carry a baby for about 15 months and give birth while standing up an event that is very quick and takes about 30 minutes before the baby giraffe becomes vulnerable to predators like lions and hyenas. Newborns are about 2 m (6 ft.) tall and weigh 70 kg (150 lb.).

The most common giraffe species that is found in Tanzania is the Maasai Giraffe, while a few species of the reticulated giraffes can be found in parts of Kenya, like the Samburu national park. It was in 2016 that Genetic research led to a four new taxonomic classification derived from single species of giraffes which also led way to five subspecies and two ecotypes. The new species which are listed below include the northern giraffe, the southern giraffe, the reticulated giraffe and the famous Masai giraffe.

Giraffes Found in other African Countries

All Giraffe species and subspecies in numbers:

What is the tallest and biggest giraffe in the world?

unfortunately, the tallest giraffe ever recorded in the world died in July 1969. It was named George, a Maasai bull (male giraffe) from Kenya that was transferred to Chester Zoo in England, United Kingdom. George the Giraffe stood at 19ft from head to hoof and 20 ft from horn to hoof when he was nine years old.

How long does it take for a giraffe to give birth?

The gestation period of a giraffe normally takes around 15 months for a baby giraffe to be born. Labor takes only about a quick 30–60 minutes once the hooves of the baby giraffe begin to be seen because if labor takes any longer, the baby giraffe will be an easy target for predators in the wild.

Why do giraffes have long tongues

Being browsers, giraffes have developed long tongues that are so dexterous and flexible so that they can browse, select and grasp any particular leaves and twigs that they want, while the inner linings to their mouths seem to be leathery so that they can chew and press thorns from acacia trees without harming themselves

Why do giraffes have long eye lashes

Giraffes have long eyelashes to sense the thorns on acacia trees, the lashes also help in protecting the giraffes form dust and ants out of their eyes

What types of giraffes are endangered and vulnerable?

Due to poaching, deforestation, human encroachment due to our ever-growing population, habitat loss, habitat degradation Human activity continues to impact on giraffe population and their habitat across the world and the African continent in particular.

Book a safari today to see this amazing wildlife.
Contact Us
Need Help? Chat with us
Start a Conversation
Hi! Click one of our member below to chat on Whatsapp
The team typically replies in a few minutes.
Chat with Diana
Live Chat Support